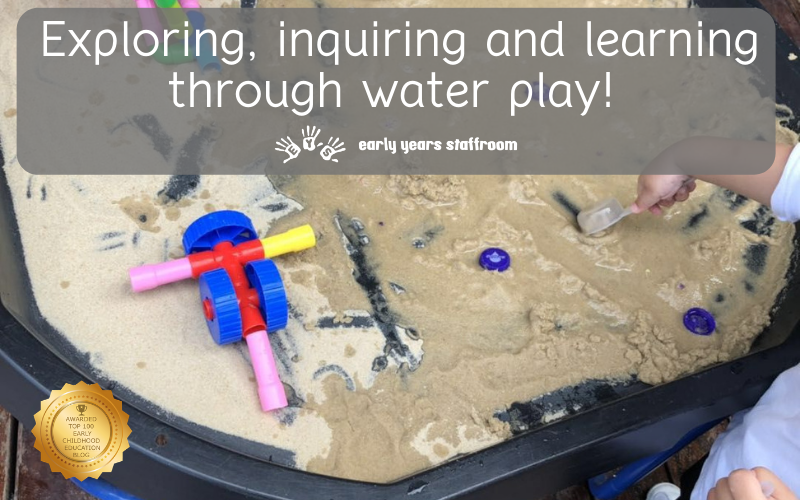 Water play delights the senses and is far more than simlpy fun for young children. This type of senseory play is important for child development; physical, mental (cognative) and social emotional. It helps develop fine motor sklls and hand eye coordination. By playing alongside and with others they develop their social skills. At the same time they use their minds to develop their thinking as they explore why certian objects sink and others float and experiment how water travels.  Children also learn mathematcal concepts in a hand on way.

A case study of 2-3 year olds in a Nursery setting.

Water provides movement from simple to complex play and we have seen very high levels of involvement in the water play.

Our children have always been drawn to the water, we have this available in our continuous provision and have seen a huge development in the dispositions of learning for example investigating, problem solving, critical thinking, taking risks, concentration and courage.

For several weeks at the beginning of term children were deeply engaged in water play, working out ‘how it works’, building their fine and gross motor skills. Children had not had much experience of extending water play. After watching children explore the pipets and jugs in the water we added further provocations that involved further challenges. For example, changing the colour of the water, children responded by making medicines and drinks for each other. The children noticed the changing colours as different colours were added. 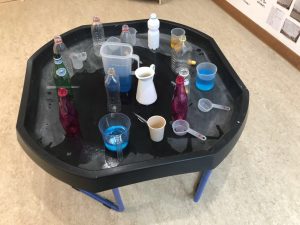 Children had to problem solve when they had tipped all the water out. How can they get it back in to the bottles to use it?

The children used their senses when we added flower petals to the play water, they thought it looked and smelled beautiful, the children’s play developed into making tea for each other using the flowers and water. We used our real tea set to give the children authentic experiences.

Children began experimenting by putting a lego boat and putting it into the water, does it float or sink? They observed and stated that the lego will float because it has air inside. The boat in fact sank and the children said ‘oh it is a submarine!’

We added guttering, and this inspired teamwork to save and transport the water further developing their communication skills. The children were focused on this activity for long periods and described the water flow as a steam.

We developed this further by using construction tubes from marble runs in the water. The children began using their critical thinking skills making intricate models that water can travel through.

When we added water to mud outside the children loved the muddy puddles and were taking risks by putting hands in. What could be in there? Is it OK to get a little messy? 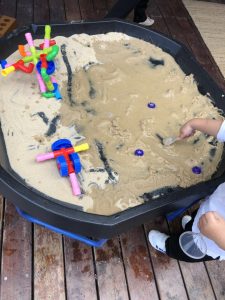 Teachers then added water to sand and asked the children ‘What has happened to the sand?’. Children responded that is felt cold and was now a different colour. Children continued to experiment with adding more water, carefully transporting from one tray to another being careful not to spill it. Then the children added the construction tubes and tested how the water with sand in travels. They noticed it was much slower!

When the unthinkable happens….Homeschool for all.

What is so special about Forest School?

Wellbeing in the Early Years

What do I get for my membership?

Choose from the following membership plans.

£90.00 now for which gives you five licences for membership for 1 year. Your subscription for the second and subsequent years will be £7.50 per month. Less than 35p per week per user! Join now before the price increases along with our new benefits.

£48.00 now for one licence which gives you membership for 1 year. Your subscription for the second and subsequent years will be £4 per month. This is less than £1 a week! Join now before the price increases along with our new benefits.

£90.00 now for which gives you a licence for membership for 1 year. Your subscription for the second and subsequent years will be at £7.50 / per month. Join now before the price increases along with our new benefits.

£48.00 now for which gives you a licence for membership for 1 year. Your subscription for the second and subsequent years will be at £4.00 / per month. Join now before the price increases along with our new benefits.

If you would like to pay by invoice instead please email